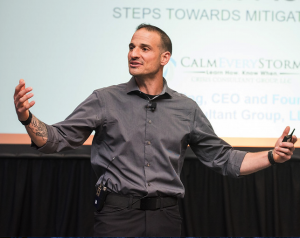 Mr. King has spent over two decades working and volunteering in a multitude of crisis workplace environments. Starting his professional career working in mental health and substance abuse treatment centers in 1992, he worked in both long term and acute psychiatric and residential treatment facilities. He excelled in both direct care and supervisory positions and eventually worked his way up the professional ladder serving as a Unit Manager and Alternate Program Director for a 56-bed adolescent behavioral modification treatment program. During his tenure in that role he was also assigned to serve as a Unit Coordinator for a 19 bed Adolescent Sex Offenders program.

While working in the mental health and rehabilitation industry he was certified in a number of nationally recognized Crisis Prevention and Intervention Training programs, and co-led ongoing employee training of nearly 140 staff members within one of the facilities for which he worked. He was also responsible for the development and creation of two adolescent behavioral modification treatment models which were later implemented for use with both Chemically Dependent and Dually Diagnosed patients within the residential treatment unit.

Throughout those years he participated in over 400 documented crisis situations involving aggressive, dangerous, and mentally ill individuals where he was required to intervene attempting to utilize verbal and physical techniques, which at the time were thought to be the “standard” for the industry, routinely turned out to be ineffective, dangerous, and difficult to actually utilize. While unfortunate and frustrating at the time, it was a result of those harrowing experiences that drove him to develop a safer and more effective method to intervene during crisis situations.

That drive led to the creation and launch of the Crisis Consultant Group, LLC in 2004, teaching a highly effective, safe, and incredibly realistic curriculum of verbal and physical intervention techniques, currently utilized in 36 States across the USA and internationally, and in a myriad of workplace environments.

Gaining a wealth of experience and knowledge from USMC service and combat deployment for OIF/OEF, as well as Law Enforcement and Tactical experience over 14 years, Brendan does his best to share those lessons learned in a light-hearted, yet realistic manner to audiences all over the United States.  Mr. King has also been featured in publications such as The Washington Post Newspaper (both print and online), featured interviews with CBS News, and as a consultant for numerous private organizations helping them to better prepare their workforce for emergency situations and managing crisis behavior.

Having served as a Sergeant in the US Marine Corps Reserve, he safely returned from deployment to Iraq to serve in Operation Enduring Freedom / Iraqi Freedom. Sergeant King participated in the liberation of the country of Iraq, while performing combat operations with the 4th Light Armored Reconnaissance Battalion. While there, his company was attached to various infantry battalions providing armored security, combat operations, and reconnaissance for the other infantry troops on the ground. Also having been attached to Task Force Scorpion he participated in numerous raids to capture former Baath party leaders, Republican Guard troops and Saddam Hussein loyalists. He was certified as a Tan Belt in the Marine Corps Martial Arts program and has been an active student of Hwal-Moo TKD under Grandmaster Kun Hwa Lee. This art focuses on practical combat and self defense, incorporating elements from many different martial art styles, such as: Tang Soo Do, Hapkido, Judo, Jujitsu, and Muay Thai Kickboxing to defend against both single and multiple attackers. In addition, Mr. King has been a certified Fundamentals Level Coach in the Personal Defense Readiness™ system for over 7 years. This reality based self defense system was created by industry pioneer and self defense expert, Mr. Tony Blauer of Blauer Tactical Systems (BTS).  CCG is one of only two authorized affiliates in Virginia to teach this system under BTS.

Mr. King brings law enforcement training, certifications, and experience through his work as a sworn Deputy Sheriff assigned to the Patrol Division and SERT (Sheriffs Emergency Response Team) with Fauquier Country Sheriffs Office in Northern Virginia. Having been assigned to both the Entry team and one of two team Snipers, Mr. King has had numerous years of experience with high risk / high stress emergency situations. His criminal justice background is further rounded out as he has worked as a Community Corrections Local Probation Officer in addition to briefly working as a Bail Enforcement Agent for Truthseekers, LLC where he conducted surveillance, apprehension, and retrieval of fugitive felons.